Well, as of last week, I had to expand my collection into case #6.  Up until my latest purchases of new pencils that came out around the world in June 2019 (11 of them), I could fit my primary collection in 5 cases.  The new pencils would have fit in by count (5 cases will hold 240), but I had no way to keep everything grouped together for display, so the new case.

There are currently 232 pencils in the six display cases, along with the 15 custom pencils in the stands below, plus in the Pentel Salesman Sample Case (above the Knight’s head), there are 13 pencils that have alternate labels or something that makes them just slightly different in markings from the ones in the display cases.

Again, something I didn’t really want to do, but had to, to keep it organized was to split the P200 for Boys & Girls pencils into 2 cases, but I moved the Brazil ones to Case 5 and left the Japanese ones in Case 2.  It just so happened that they lined up on the middle shelf on the bottom row of each case.

Since I started this blog, back in 2017, my display has grown from 3 cases in March 2017, to 4 cases in June 2017 and then to 5 cases in September 2018.  Unless Pentel does something super extravagant next year for the 50th anniversary of the P205, I should have room to grow for another year or two (I hope).

Over the next few weeks, I will showcase the new pencils for 2019.

I have some updates here for five previous blogs, where I have purchased pencils that would have gone with these blogs.  In the near future, I will go in and update the previous blogs with these newly acquired, but not necessarily new, pencils.

I purchased this pencil about 2 weeks after I published this blog.  It looks to be a very clean Generation 2 pencil, although it is possible that this is actually a Generation 3 that has had the printing removed. But I can find no traces of the printing being wiped off or scrubbed off, so I am designating it as a Generation 2.

Prior to September 2018, when I acquired this pencil, I had assumed that the oldest version of the P207C was the Generation 1A, since “P205” was molded into the cutout, and they stamped the bottom with the size “0.7 m/m”.  My assumption was that they did that so that there would be no confusion about what size this really was.

Apparently, I was wrong, and they did release the P207C before they started stamping the size on the bottom. This is a very clean pencil that does not look like it ever had anything stamped on the bottom, so I have designated it as a Generation 1.

In August 2017, again, 2 weeks after the blog, I got this pencil, which confirmed that Pentel did carry the Short Tip over to the Generation 2 pencils for the P207C, just like they did for the P205A pencils.

Prior to this year, I had never found one of these up for sale, although I knew of other people who had one of these.  Then 2 months ago, I found it for sale in Japan, when I was also purchasing some other pencils.

Since this series of pencils does not have any printing on the sides, up until Generation 5, and the molded size is a characteristic of Generations 2 & 3, I decided to go a little conservative on the dating and call this one a Generation 3. 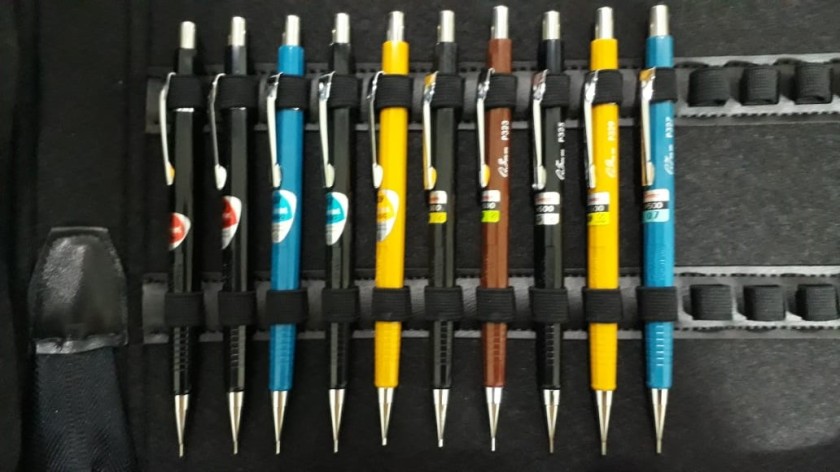 Photo from collection of Valter dos Santos Junior of Brazil

The above picture shows a wider variety of the P32x pencils, of which I only have a few.

I purchased the above 3 pencils in August 2018, which left me still needing the Orange version of this.

In January 2019, I found a full set of these for sale and purchased them, so that I could complete my collection, and also replace the Black version that did not have a sticker, since all of these did.

As you might be able to tell, I really like the Spoke pencils, especially the Spoke 4.  My original purchase had an Anodized Aluminum grip, and my second purchase was of the Titanium (shiny) grip.

I purchased this in October 2018 because I decided I wanted to try the heaviest grip.  Once I received it, I decided to change out the Tip and Cap from an extra Gilded series pencil that I had.

In December 2018, I decided to go ahead and get the last of the grip materials that I did not have.  I decided on the Black Body, just to give it a clean look.

In April of this year, Brian Conti released a new color body and a new grip.  I decided I wanted both.  This is currently my go-to pencil at work.

And, just to show them all together…