This post will cover the Pentel P203E Brown 0.3mm pencils.  At this moment, I only own 3 distinct versions of this pencil, but I will cover some of others.

This is the earliest version of the P203 that I have been able to acquire for my collection.  This pencil has the m/m in the printed text on the side, but does not have anything molded into the bottom (like a Generation 3 would). The cap still has the metal insert that keeps it from pushing the eraser down into the Inner Body.

When I was trying to buy these pencils online, I assumed they were (what I currently call) Generation 5 because of the text on the outer body. It wasn’t until I received them and found that the inner mechanisms all belong to a 4th Generation pencil.

When I was first categorizing my pencils, I called this “Generation 5” (and later generations were 1 step higher) because I had about 11 out of about 175 pencils, so I thought this was a legitimate full Generation.  But I was getting frustrated, because I could not find a “Generation 5” P205A Black pencil.  It wasn’t until at one point, I looked at what pencils comprised this generation and found that (at that time) only 0.3mm and 0.7mm made up this generation, and for the 0.7mm, it was only the smaller run of pencils (not P207s).

I then decided that this must be an intermediary generation to use up existing supplies.  So I changed “Generations 6 and 7” to the current Generations 5 and 6, and since this is a hybrid of Generations 4 and 5, I decided to call it Generation 4.5.

I picked this pencil up with the label (model # & barcode) on it as my example of a Generation 6 P203.  It is hard to tell in the individual pictures, but if you look at the image at the top of this post, you can see that this is a slightly darker shade of plastic that makes up the body of this pencil.

I don’t know when the P203E was first introduced, but I suspect it was at least as far back as Generation 2.  On the cover of the German 1975 Catalog (at least that is where I believe this is from), it shows (bottom row, to the left) the 4 standard P200 pencils (at least I think that is Brown, Black, Blue and Yellow) without text on the side. 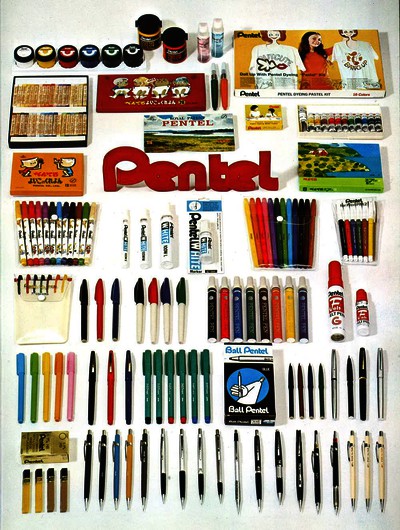 If this is the case and that is a P203E on the cover, then it was released in at least 1974 as a Generation 2 pencil.  The other 4 P200 family of pencils appear to be Generation 3 with text printed on the side, so 1975 is where I assume that Generation 3 starts.

I also assume that there are Generation 5 P203s out there, but as of the date of this post, I have not found any.  Each time I have tried to get one, it turns out to either be a Generation 4 (I currently have 4 of these), or a Generation 6 (as it is hard to tell in online pictures).

Hopefully in the future, I will have a more complete collection of this model of pencil and will have to update this post.